Based on current discussions by the European Commission, launch conditionalities would not account for the distinct nature of small and mid-sized companies, OMPs and ATMPs. EUCOPE’s Alexander Natz breaks down this aspect of the revision of the General Pharmaceutical Legislation and why it would prove unsustainable for smaller companies and disproportionately burden market authorisation holders without meaningfully improving patient access.

The last comprehensive review of the European pharmaceutical legislation was tabled almost 20 years ago. Since then, Europe has entered into fierce competition against its American and Chinese counterparts in innovation and drug development. The COVID-19 pandemic has put health at the forefront of the political agenda and accelerated the adoption of new technologies. Within this new context, the ambitious revision of the EU General Pharmaceutical Legislation (GPL) – the publication of the proposal now planned for Q1 2023 – should focus on how a strong biopharmaceutical innovation base can better deliver the health needs of European citizens and reinforce the EU’s place as a leader in R&D.

Several incentives are being considered to enhance access to medicines and overcome unmet medical need (UMN), including the conditionality of regulatory data protection (RDP). Under this system, companies would only receive their maximum duration of RDP if they meet a series of conditions. Currently, the two conditions under consideration are that companies must launch a product in all 27 EU Member States within a given timeframe and that a product addresses an UMN based on a yet undetermined set of criteria or definition. For the former, a theoretical opt-out is provided for Member States, but no clear reason exists as to why a Member State would make that choice.

Both conditions create additional risk for companies, especially small and mid-sized ones, to launch products in the EU. This is particularly true for Orphan Medicinal Products (OMPs) for which similar conditions are being explored. The revision of the OMP regulation is also exploring the introduction of a launch conditionality in most, if not all, Member States, and a product addressing a vague Highest Unmet Medical Need (HUMN) concept which would modulate the market exclusivity awarded to an OMP. The challenge with these obligations, and incentives, is that they attempt to impose a one-size-fits-all solution on a wide range of different therapies and marketing authorisation holders (MAHs), and do not consider the full picture, in trying to promote access.

Under the current legal framework, obligations and conditionalities already exist in the General Pharmaceutical Legislation (GPL) and these measures are proportionate to the decision-making powers of marketing authorisation holders. Under the GPL, a MAH must launch an approved product in at least one Member State in the EU within 3 years of receiving a marketing authorisation to maintain the authorisation. For OMPs, should the MAH be unable to supply sufficient quantities of the product, the orphan exclusivity provided by the OMP regulation can be broken.

Overall, conditionalities disproportionately burden market authorisation holders. During pricing and reimbursement (P&R) negotiations, companies do not have full decision-making power, as a range of stakeholders are engaged in the discussions and an agreement must be reached. In some countries, due to their use of External Reference Pricing (ERP), a P&R process cannot conclude before a therapy is reimbursed in a number of other Member States first. The lack of full decision-making power particularly affects timing between the authorisation and access. This dynamic, as well as other regulatory requirements, all impact the ability to launch a therapy.

Solutions should take a full life-cycle approach and look at the barriers faced by all involved stakeholders, from industry to payers, healthcare systems, and policy-makers to achieve the desired effects of improved and more equitable access. In many cases, local, national, or inter-country solutions should be explored. Policy changes rather than hard legislation may be more suitable to address these challenges.The GPL and the OMP legislation are not vehicles for access solutions. Attempting to use these legislative frameworks for this purpose can lead to unintended negative consequences. What the EU legislation can do however, is create a favourable environment for marketing new medicines.

Impact on small and mid-sized companies

There are real limitations on small and mid-sized companies to launch a medicine in all 27 EU Member States within a fixed timeframe. If a company has a fixed manufacturing capacity or is present only in a handful of countries, a requirement to launch in a majority of Member States, including where it has no presence, is a notable challenge. Significant capital investment would be required in order to establish a presence in additional Member States, and potentially invest in additional manufacturing capabilities. This can be difficult for any MAH, and especially for small and mid-sized companies.

The cost alone of putting together a value dossier can amount between 600,000 and 1.2 million EUR, while some smaller companies have a staff of no more than five to 10 people dedicated to launch products in Europe across different national markets. The launch conditionality would place immense administrative and financial burdens on these smaller companies, who play an important role in the development of new medicines, particularly in underserved sectors such as rare diseases. A mandatory (or quasi-mandatory) marketing launch would impact the commercial viability of these smaller companies as they are not all adequately equipped to go through the pricing and reimbursement procedures in all Member States in a fixed time period. Many may also not have local presence or commercial partners in certain regions.

Even if it were possible, there is a negative impact on access as MAHs consider the commercial viability of a product launch, which would include expanding manufacturing to justify the additional capital invested in expanding their reach. These challenges create a risk that there will be a consolidation of the biopharmaceutical sector, through future mergers or sale of pharmaceutical assets, as smaller companies struggle to comply with these new requirements.

The unique characteristics of OMPs and Advanced Therapy Medicinal Products (ATMPs) make the condition to launch in all EU Member States unviable. The infrastructure requirements, expertise and specialist centres needed to deliver certain innovative therapies, such as gene therapies, do not exist in all Member States. As an example, currently, there are only five treatment centres in all of Europe that are certified or in the process to be certified for the administration of therapy for a certain rare hereditary disorder. There is only one hospital, San Raffaele in Milan, is equipped to administrate a treatment for ADA-deficiency, another ultra-rare genetic condition. On top of that, when discussing ultra-rare diseases,  ADA-deficiency have between seven and 13 new patients per year in all of Europe. We are faced with a conditionality that cannot be fulfilled if the patient simply does not exist in all Member States. These limitations would apply for cell and gene therapies in more prevalent indications as well.

For OMPs specifically, there is the added challenge that patients might not be present in all Member States, or that they are only detected every few years. Thus, undertaking a lengthy, expensive, and time-consuming P&R process is not viable for all therapies. Instead, to improve access while encouraging innovation in small patient population and overcome infrastructure requirements, the Commission should explore improving and streamlining cross-border healthcare frameworks for example.

The EU has changed significantly since the last review of its General Pharmaceutical Legislation. Scientific and technological advances have improved patients’ health, and supported a more efficient, and cost effective, way of discovering and developing medicines. These advances have translated not only into ground-breaking medicines, but also into alternative uses for existing ones.

As we’ve seen from the information above, launch conditionalities would prove unsustainable for smaller companies, would not account for the specificities of OMPs and ATMPs and disproportionately burden market authorisation holders. On the whole, they would not meaningfully improve patient access as none of these provisions can impact reimbursement and only look at one part of a complex equation.

In 2002, the European Commission released its “Strategy on Life sciences and Biotechnology”[ii] claiming that the EU was at a crossroads and could either lead or follow. 20 years later, we face the same challenge. A competitive and resourceful EU biopharmaceutical industry is crucial for public health, economic growth, jobs, trade and science. With the upcoming publication of the proposal for the revision of the GPL planned for Q1 2023, the EU needs to support industry – especially smaller companies – to be competitive, innovative, and resilient so that it can better respond to patients’ needs and build an attractive scientific-based ecosystem that can lead on a global level.

For more information on Launch Conditionality and its potential impact on small and mid-sized companies, please check out our recent podcast on the subject. 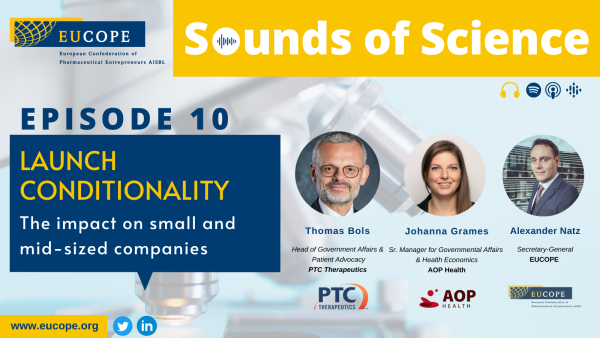 Alexander Natz is the Secretary General of the European Confederation of Pharmaceutical Entrepreneurs (EUCOPE) in Brussels and advises innovative pharmaceutical and biotech companies, including start-ups, in regulatory and pricing & reimbursement matters from the EU law and German law perspective.

From 2008 to 2013, he was Head of the Brussels Office of Bundesverband der Pharmazeutischen Industrie e.V. (BPI). Before, he worked as a lawyer at Sträter Law Firm in Germany with a special focus on managed entry agreements and licensing of pharmaceuticals. Dr. Natz has also worked in the field of competition law with the European Commission and in the pharmaceutical industry.